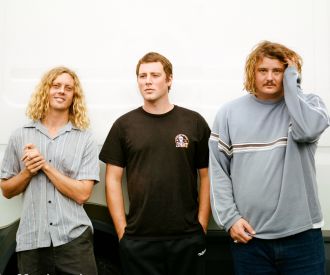 With hits peaking in the ARIA charts and collaborated with the likes of US rappers Reese and Lil Yatchy, surf music and garage rock trio Skegss have made their mark in the international music world and continue to enjoy a steep ascent to fame. Consisting of band members Toby Cregan, Jonny Laneway and Ben Reed, Skegss are a band to look out for!

Forming in Byron Bay in 2014, it was not until 2018 that the band garnered support with the release of their debut album, My Own Mess, which was released in 2018 and peaked at number 2 in the ARIA Charts. Skegss have also enjoyed several successful singles including “Under the Thunder”, “Spring Has Sprung” and “L.S.D”.

2020 was a significant year for Skegss, releasing 50 Push Ups for a Dollar on vinyl which peaked at number 4, followed by their double EP compilation album, Holiday Food, Everyone is Good. In 2021, the group released Rehearsal, which has been met with international acclaim. Having performed internationally at numerous festivals and tours, including Good Things Festival, Skegss are known for their incredible live performances!

Following the release of their successful 2021 albums, Rehearsal, Expect an array of hits from their previous albums as well as their most recent albums in a high-energy performance! The tour is scheduled for 2021 but please note cancellations could be possible due to the coronavirus pandemic.

What are Skegss’ biggest hits?


Skegss’ biggest hits include “Under the Thunder”, “Spring Has Sprung” and “L.S.D”, “Up in the Clouds”, “Fantasising” and “Got On my Skateboard”.


What are Skegss’ albums?

Who is in Skegss?

Skegss is made up of band members Toby Cregan, Jonny Laneway and Ben Reed.

Where are Skegss from?

Skegss are originally from Byron Bay.

What style of music are Skegss?

When did Skegss form?

SKEGSS - UP IN THE CLOUDS