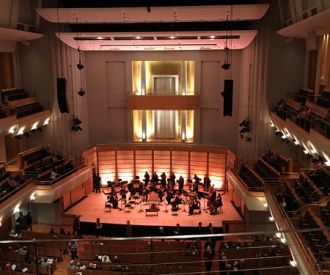 Situated in the very heart of the bustling city of Sydney, Australia’s City Recital Hall hosts a range of spectacular and high energy concerts and events, showcasing both emerging artists and classical music productions. The City Recital Hall is also known for accommodating spoken word,chamber recitals and music because of its amazing acoustics, with specially designed acoustic banners and a 1.8 reverberation time which is attuned for chamber music. The City Recital Hall is characterised by grey, gold leaf, light timber paneling and an exquisite, grand white marble staircase. Based on the classic European neoclassical design, the City Recital Hall boasts a shoe-box design, offering incredible views from all over the theatre.

Boasting over three tiers of sloped seating, City Recital Hall offers some incredible views of the stage, whatever the performance you are enjoying. It also has two galleries that wrap around the rear of the auditorium.

With a capacity of 1, 238 guests, City Recital Hall boasts an intimate and immersive atmosphere, whilst also providing spectacular performances with its amazing acoustics.

Located in the centre of Sydney, the City Recital Hall’s address is:

There is accessible parking available in the car park which is next to the venue’s elevators. This will allow patrons to access the recital hall by using the car park directly one hour before the performance starts.

When the City Recital Hall opened in 1999, it was the first specially designed concert venue to be built in Sydney since the creation of the Opera Sydney House, which was built in 1973. It was originally intended to host solo recitals, chamber music and the spoken word and was initiated by the City of Sydney. In 2015, the City Recital Hall was named an official Non-For-Profit Company.

While the City Recital Hall still mainly showcases classical and chamber music, it now also shows a range of contemporary music, making it one of the most popular music venues in Sydney.

Paul Kelly and Paul Grabowsky: Please Leave Your Light On