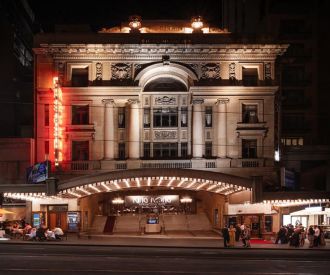 Built in the walls of a historic picture palace, Regent Theatre is undoubtedly one of the most important theatre venues in Melbourne. Listed by the National Trust of Australia, the Regent Theatre is on the Victorian Heritage Register and it is known for its gothic style lobby as well as its exquisite Spanish Baroque style Plaza Ballroom - it was originally built to recreate the escapism of the Hollywood era. The theatre has always been known as one of Victoria’s most lavish theatres since its inception in 1929.

The Regent Theatre has played host to world-class, international and national musicals, plays and comedians including performances such as Fiddler on the Roof, the Lion King, Priscilla queen of the Desert, Wicked, Swan Lake, Ghost the Musical, We Will Rock You, Oliver!, Cats and Billy Elliot the Musical. The Regent Theatre also plays host to a range of festivals and awards such as the Melbourne International Comedy Festival Gala, APRA Music Awards and the AFI Awards.

The Regent Theatre capacity is 2,162 seats which are divided across the Stalls and the Circle sections of the auditorium.

If you are looking for an intimate, immersive experience, then you can enjoy incredible views from the Stalls. Alternatively, the top of the Circle provides awe-inspiring views.

If you are making wheelchair and disabled bookings, please call the Theatre Box Office on (03) 9299 9800

The Regent’s theatre strives to be an accessible venue but please note that there is not a lift in the Regent Theatre. The front doors open 1 hour before performance times and it is recommended that you arrive an hour before the performance time in order to ensure access ease.

It is also recommended that access customers sit in the Stalls area of the theatre as this is the most accessible area of the auditorium.

Frames and crutches can be stored in the recesses of the front or the back of the Stalls.

If you have any sight impairments seats close to the stage can be requested when booking.

There is a hearing loop in the Regent Theatre either with headsets or neck loops which are available in the cloakroom.

The Regent’s Theatre, which was designed by Cedric H. Ballantyne, opened on the 15th March 1929 and was built under the supervision of Francis WIlliam Thring and was the flagship of the Regent Cinema franchise. When it was originally built, the Regent Theatre had a capacity of 3287 and beneath it, ‘the Plaza’ had a seating capacity of 1235 and it was later converted into a cinema. In 1929, the Regent Theatre was wired for sound and opened on 10 May 1929 with Alias Jimmy Valentine.

In 1945, the theatre experienced an extreme fire and it went into decline, leading to it being auctioned off. In December 1947 a few changes were made to the auditorium when it reopened. After almost being turned into a car park, the Regent was renovated and then reopened again in 1996 for stage productions. In 2019, the Regent Theatre underwent a refurbishment and it reopened again in January 2020 with the National Theatre’s award-winning production of War Horse which was the first play to grace its stage in its history.

The Surfrajettes at The Regent Theatre

Konk a Lambi, (Live at the Regent Theatre)