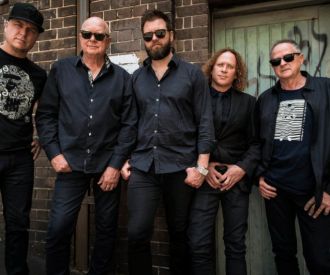 Tickets for The Angels

Regarded as pioneers of the Australian pub-rock genre, the Angels are a renowned rock band in Australia and known for their countless top-selling singles including “No Secrets” (1980), “Into the Heat (1981) and “We Gotta Get out of This Place” (1987). Composed of band members Bernand “Doc Neeson”, John Brewser, Dave Gleeson, Nick Norton and Sam Brewster, the Angels were inducted into the ARIA Hall of Fame in 1988.

Formed in Taperoo in 1974, a small suburb in Adelaide, the Angels were formerly named the Key Stone Angels and famously supported AC/DC during their South Australian tour under this name in 1975. After changing their name to simply the Angels, the band released their first single “ Am I Ever Gonna See Your Face Again” which was met with significant acclaim.

The Angels released their self-titled debut album in 1997, followed by several successful albums, including their second album, Face to Face, which they released in June 1978. Enjoying a steep rise to fame in this period, the Angels performed at numerous events and toured the country, earning themselves the crown of “Australia’s paid band” in 1978. In 2012, the band released their first studio album in 14 years, Take It To the Streets, as well as their most recent 2020 EP Under the Stone.

Following the release of their 2020 album, Under the Stone, the Angels have announced a 2021/2022 tour, the Symphony of Angels, and are visiting most major locations around Australia throughout 2021 and 2022. The Angels have undergone several challenges and changes in band members over the years, including the tragic deaths of Chris Bailey and Neeson in 2013, and now it is composed of three generations of Brewsters,who will perform together in this show in tribute to the band’s former members.

What are the Angel’s biggest hits?


What are the Australian band the Angel’s main albums?

Who is in the Angels the band Australia?

Where are the Angels Australia from?


The Angels are from Adelaide, South Australia.

When did the Australian band the Angels form?


The Angels formed as the Keystone Angels in 1974.

What genre of music are the Australian Angels the band?

When did the Australian band the Angels disband?

Photos of The Angels

The Angels - Am I Ever Gonna See Your Face Again

The Angels
+ info
Several locations
No events
-
Follow
Why?

Prior events The Angels

The Angels: The Darkroom Tour 2020

The Palms at Crown Melbourne, Southbank

The Palms at Crown Melbourne