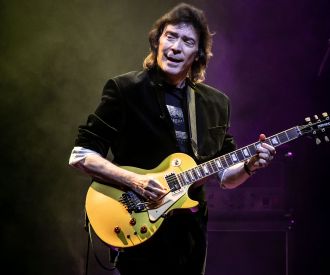 Known as one of the most talented and inventive rock musicians of our time, Steve Hackett rose to fame as the lead guitarist in the progressive rock back, Genesis, which he performed in from 1971 to 1977, contributing to six studio albums, three live albums and seven singles.In 2010, he made it into the Rock and Roll Hall of Fame as one or Genesis’ most important members in 2010.

Following the release of several solo albums, including the Acolyte in 1975, Steve Hackett co-founded the supergroup GTR with Steve Rowe, releasing the self-titled album GTR which made it all the way to no.11 on Billboard. The group disbanded in 1987 and then resumed in solo career, touring worldwide and released more than 30 solo albums including his latest solo album ‘Under a Mediterrenean Sky’ which in 2021.

To celebrate the 40th birthday of his fourth solo album titled defector, Steve Hackett has announced his Genesis Revisisted The Seconds Out + More! tour which not only visited some of the venues Genesis played on the 1977 tour. Grab you tickets now to catch one of the best rock artists of all time live in concert!

What are Steve Hackett’s biggest hits?


Steve Hackett’s biggest hits are Fifty Miles from the North Pole, Waters of the WILD, That Vast Life, Twice Around the Sun, Firth of Fifth, Doll That’s Made In Japan and many other songs.


What are Steve Hackett’s solo albums?

Where is Steve Hackett going on tour in Australia?

Yes, Steve Hackett is going on tour in Australia including the Tivoli (Brisbane) and Palais Theatre (St Kilda).

What genre of music is Steve Hackett?

Steve Hackett's music is
When did Stev
progressive rock but has explored other genres such as world music, blues and classical music.

When did Steve Hackett leave Genesis?

Where is Steve Hackett from?

Steve Hackett is from Pimlico London.

When did Steve Hackett form GTR?

When did Steve Hackett leave GTR?

Steve Hackett plays “After The Ordeal”

Steve Hackett - Shadow of the Hierophant