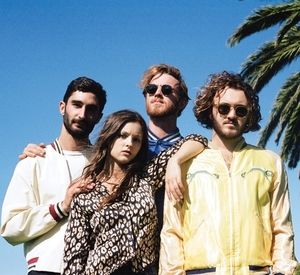 Composed of band members Jordi Davieson, Josh Biondillio and Scarlett Stevens, San Cisco is an Australian indie-pop band with a plethora of smash-hits including “Awkward”, “Too Much Time Together” and “About You” which have garnered international acclaim.

Hailing from Western Australia, San Cisco formed in 2009 and the band was originally named King George. After releasing their debut EP Golden Revolver at Blackbird Studios, San Cisco band was signed by Albert Productions in 2011 and they performed at several large-scale festivals during 2011 including Adelaide’s Fuse Festival, Bigsound and the Pyramid Rock Festival.

Enjoying a meteoric rise to stardom, San Cisco was nominated for ARIA awards Best Independent Release and Best Dance Release for the album and Best Video for “Fred Astaire ''. The band’s fourth album, Between You and Me (2020), includes several hit singles including ‘When I Dream’, ‘Skin’ as well as the popular anthem ‘Reasons’.

Following the release of their 2020 album Between You and Me, San Cisco are embarking on their first national tour since 2019. Expect numbers from San Cisco’s older albums as well as new hits such as ‘When I Dream’ and ‘Reasons’ and experience them live in concert!

What are San Cisco’s biggest hits?

San Cisco’s biggest hits include “Awkward”, “Too Much Time Together”, “Beach”, “Get Lucky”, “Rocket Ship”, “When I Dream” and “About You”.

What are San Cisco’s albums?

Who are the band members of San Cisco?

San Cisco are going on tour in 2021. They are visiting Melbourne on 4th June and Brisbane on 10th June.

When did San Cisco form?

Where did San Cisco form?

What genre of music are San Cisco?

San Cisco - Between You and Me (Live at Home)