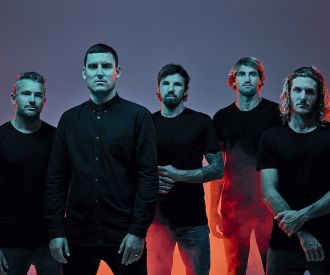 For over a decade, Parkway Drive have been considered one the most influential metal bands in the international metal scene, having sold out arenas all over the world. Parkdrive’s band members have not changed much over the years, currently consisting of band members Ben Gordon, Luke Kilpatrick, Jeff Ling, Winston McCall and Jia O’Connor.

Parkway Drive, who are originally from Byron Bay, formed in 2002, taking their name from the house and drive where they rehearsed. The band went onto release their first studio album, Killing With a Smile (2005) and then their second album, Horizons (2007) which was met with international acclaim and ranked at number 6 in the ARIA charts.

Parkway Drive has continued to release several other successful critically acclaimed albums including Deep Blue (2010), Ire (2016) and Reverence (2018). Regarded as a leading metal band, which have in many ways set the benchmark for metal bands to come, Parkway Drive are not to be missed live in concert by any metal bands.

After headlining the Good Things festival, Parkway Drive are back again to perform one of their biggest Australian shows yet on an exciting five date run which involves visiting most major Australian cities!

Supporting Parkway Drive will be other dynamic metal bands Hatebreed and Every Time I Die, making it a show to remember. Grab your tickets now for this incredible chance to enjoy a special one off performance from the legendary Parkway Drive!

What are Parkway Drive's biggest hits?

What are Parkway Drive's albums?

Who is in Parkway Drive?

Are Parkway Drive going on tour in Australia in 2021?

Parkway Drive have announced the Underdogs tour - a five date tour- on which they visit the Riverstage Brisbane on 1st July, Claremont Stadium on 13th July among other important dates.

Have Parkway Drive won any awards?

Parkway Drive's awards include the ARIA Music Awards for Best Hard Rock or Heavy Metal Album (2010,2018) and the AIR Awards for Deep Blue (2010).

Where are Parkway Drive from?

Parkway Drive are from Byron Bay.

When did Parkway Drive form?

What is the significance of Parkway Drive's name?

It was the name of the street and hosue where they rehearsed their music.