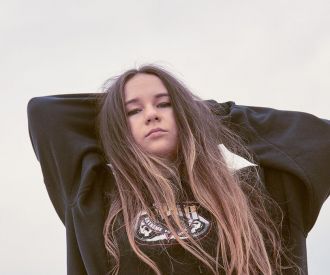 Following the release of her three successful studio albums, Mallrat has enjoyed a meteoric rise to stardom over the course of the last three months on both a national and international scale. Known for her unique sound rooted in rap and pop music, Mallrat has enthralled audiences with hit singles such as “Groceries” and “UFO” which reached number 7 and 70 in the 2018 Triple J Hottest 100.

Originally hailing from Brisbane, Mallrat released her first EP, Uninvited (2016) allowing her to start gaining recognition in the Australian pop music scene. Mallrat has since released other successful EPs including The Sky (2018) and Driving Music (2019) and she is now in the process of writing and recording her first proper debut album.

Off the back of these highly successful releases, Mallrat has toured across the US and Europe with the likes of Maggie Rogers, King Princess and Allday as well as appearing on the US TV show, the Late Late show, with James Corden for the first time.

Following her extensive international acclaim and successful EPs, Mallrat is headlining her own tour in 2021, after having to reschedule it from 2020 due to the coronavirus pandemic. and visiting most major venues across Australia. Expect a performance featuring her most-loved songs as well as some new numbers from her upcoming album. Known for her beautiful voice which can make a pin drop in an arena,  there is nothing quite like experiencing a talented singer-songwriter like Mallrat live in concert!

What are Mallrat's biggest hits?

What are Mallrat's main albums?

What is Mallrat's style of music?

Mallrat's music is rooted in pop and rap.

Where is Mallrat from?

Mallrat is originally from Brisbane.

What is the name of Mallrat's EP?

Mallrat's first album is called Uninvited and she released it in 2016.

Has Mallrat rescheduled her 2020 tour dates?

Yes, Mallrat has rescheduled her 2020 tour dates to 2021 due to the coronavirus pandemic.

Has Mallrat won any awards?

Yes, Mallrat has won awards including the South Australian Music Award and the the Vanda for her video for "Better" (2017) and (2018). She has also been nominated for multiple awards.

Kayla Jenkins
Good Her style and music is wicked.

Isabella Morris
Excellent Mallrat is one of the best and most unique artists Australia has to offer. I love her music and seeing her live is even better.

Mollie Jenkins
Excellent Mallrats style and music is so original and cool.