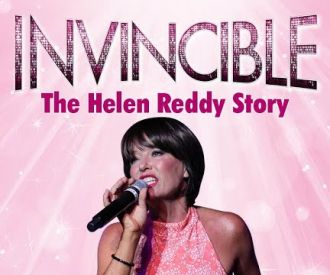 Known for her phenomenal 1973 song I Am Woman, Helen Reddy is undoubtedly one of the most iconic international stars Australia has ever seen. Having sold over 25 million worldwide and three #1 on the US Billboard charts, Helen Reddy was the first ever Australian woman to win a Grammy Award. Experience her incredible live concert with Invincible: the Helen Reddy Story Live!

Following the successful feature film, I am Woman, which was brought to screens all over the world, Nikki Bennett the Australian singer and actress brings the captivating story of her life to stage in tribute to her incredible life. Not only was Helen Reddy an unparalleled singer, but she even hosted her own Primetime series on U.S Television, making her an extremely multi-talented artist and this incredible show takes us all the way through her life.

Featuring a spectacular live band which performs Helen Reddy’s greatest hits, this unique show is not to be missed by any Helen Reddy fans. Beautifully written and performed, this unforgettable performance is a must-see show for any Helen Reddy fan. Grab your tickets for now for a night to remember!

Who stars in Invincible: the Helen Reddy Live in Concert?

Nikki Bennett stars as Helen Reddy in the show.

Who is Helen Reddy?

Helen Reddy is a celebrated Australian singer and entertainer, who was the first woman in Australia to achieve a grammy.

How many #1 hits has Helen Reddy achieved?

Helen Reddy has achieved three #1 hits on the US Billboard charts and made six more in the US top 10.What is Helen Reddy’s biggest hit?

What is Helen Reddy’s biggest hit?


Helen Reddy’s biggest hit is undoubtedly I am Woman.

Where is Invincible: the Helen Redding Story Live in Concert showing in Australia?


Invincible: the Helen Redding Story is showing at the State Theatre Sydney and Anita’s Theatre, Sydney.

Invincible: the Helen Redding Story was written by Nikki Bennett.