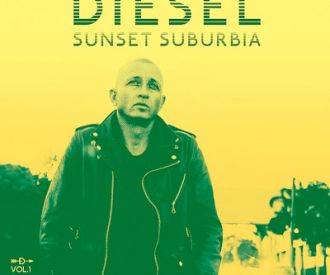 With over 35 singles, 13 albums and 16 ARIA Awards, Diesel, whose birth name is Mark Denis Lizotte, is undoubtedly one of the most phenomenal musicians Australian has ever seen. Fusing a plethora of styles to create a unique sound rooted in rock and blues, Diesel has collaborated with multiple artists such as Jimmy Barnes and Chris Wilson, as well as associating himself with bands such as the Innocent Bystanders and Diesel & the Injectors.

Born in Massachusetts in the US in 1966, Diesel emigrated to Perth in Australia with his family in 1971. Diesel began his music career by performing in multiple bands in his teens, joining the Innocent Bystanders, a Perth pub rock band in 1983 and then forming Johnny Diesel & the Injectors in 1986. The band were known for their self-titled album which reached No.2 on the ARIA Albums Charts and included several hits.

Lizotte launched his solo career in August 1991, releasing his single “Love Junk” which was high in the top 20 and performed with Barnes as well as touring solo on this Rock n’ Soul Tour in 1992. Off the back of this success, Diesel released his debut solo album, Hepfidelity, which soared to No1 on the ARIA charts. Since then Diesel has made several successful collaborative and solo releases, including the release of Sunset Suburbia in 2019.

After announcing their Sunset Suburbia project, a diverse record consisting of new ideas and subtle sounds, Diesel has announced an extensive Australian tour to celebrate the release of the album. Not only will Diesel, alongside his three piece band, perform tracks from the new album, but will also include well-known hits including ‘Tip of My Tongue, ‘Cry in Shame’ and 'Soul Revival''.

What are Diesel’s biggest hits?


What are Diesel’s main albums?

Yes, Diesel is going on tour in 2021/2022 following the success of the Sunset Suburbia Project and visiting most cities in Australia.

What style of music is Johnny Diesel?


Johnny Diesel’s music style is rooted in blues and rock.

When did Johnny Diesel and the Injectors form?


Johnny Diesel and the Injectors formed in 1986.

When did Diesel leave Johnny Diesel and the Injectors?


Diesel left Johnny Diesel and the Injectors in 1991 to launch his solo career.

Which awards has Johnny Diesel won?

The Palms at Crown Melbourne, Southbank

The Palms at Crown Melbourne