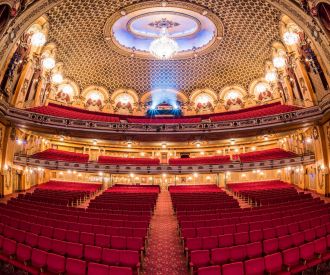 The State Theatre Sydney is undoubtedly one of Sydney’s most renowned and iconic venues for showcasing film, theatre, music and a range of other performances. The venue has been the home of the prestigious Sydney Film Festival in 1974 as well as many other world-class acts and artists, having welcomed the likes of Shirely MacLaine, Lenny Henry, Cyndi Lauper, Julio Igelsias, Tim Minchin, Tori Amos, Shirely Bassey, John Legend, Dawn French, Whoopi Goldberg and Harry Connick as well as musicals such as Jesus Christ Superstar and Evita.

As a  heritage listed building since 2 April 1999, the State Theatre Sydney is known for its exquisite, gothic, Italian and art-deco interior and unique building. Inside the theatre, you can discover features artwork and fixtures by significant Australian artists such as William Dobbell and Charles Wheeler. The Koh-I-Nor cut crystal chandelier in the theatre’s auditorium is the second largest on earth and weighs more than four tonnes. It has always been a socially and culturally important venue in Sydney and is steeped in cultural history.

The State Theatre Sydney has a capacity of 2,034 seats. It is divided into the Dress Circle, the Mezzanine and the Stalls Main Floor, which undoubtedly provides the most immersive views of the stage. Some of the best seats in ouse can be found in the Dress Circle (particularly rows A to J) and you can enjoy excellent views of the stage, whilst providing you with the opportunity to appreciate the designed Art Deco roof above.

It is located in the centre of Sydney, opposite Myer, in the Market Street close to Pitt Street Mall.

If you have any access inquiries or need to book Wheelchair and disabled seating then book through the State Theatre box office by calling 02 9267 3234.

There is currently no disabled toilet in the State Theatre because of heritage restrictions. You can use the diasbled toilet which is located next door at the QT hotel an is available for Patron use.

There is no doubt the State Theatre is one of the most historical and fascinating venues in Sydney. Opening on the 7th of June 1929, the theatre was part of Stuart Doyle’s vision, who owned the Union Theatres and was designed by architect Henry White. The theatre was designed at a picture palace and was regarded as ‘The Empire’s Greatest Theatre’. The opening night included the bandleader Will Prior. It was mainly designed as an outlet and venue for entertainment during the Great Depression.

From then on, the theatre hosted various motion pictures and live performances from world-class acts. Leading up to and during World War II, patrons were able to view the news of the war on the big screen, whilst also providing escapism for people experiencing the war. The State Theatre’s programme reflected different cultural movements in society, such as the pop culture movement and the rise of Hollywood. Today, it still attracts some of the biggest names in comedy, music, dance and theatre.

We Can Be Heroes - Bowie Orchestrated

Nothing Else Matters - A Symphonic Tribute to Metallica