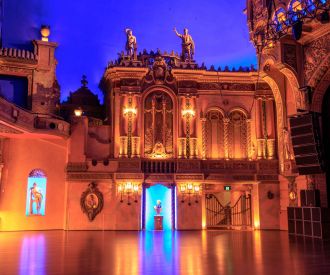 Renowned as one of Melbourne’s most iconic venues, Forum Melbourne offers a wide range of exciting events including music, cinema, theatre and events. Forum Downstairs is predominately a concert-venue for large-scale performances, having welcomed the likes of Oasis, Madonna, Harry Styles, Katy Perry, Dizzie Rascal, Lily Alan and many more. It has also been used as a venue for the International Comedy Festival and Melbourne Festival which features scores from international and national music artists. On second-floor Forum II is a smaller,more-intimate theatre-style amphitheatre which hosts a range of smaller-scale artists.

Originally designed to be an atmospheric theatre, the Forum Melbourne features a unique and beautiful cerulean- blue ceiling with twinkling stars, the Forum makes you feel like you’re gazing up at the night sky. The Forum restored many of its original features in 2016 after it underwent renovation which involved restoring the mosaic entrance and repairing its majestic statues. A vibrant and architecturally exquisite venue, Forum Melbourne is undoubtedly one of the most special and iconic venues to visit in Australia.

Seating varies depending on the performance.

The Forum Melbourne address is

If you are using the Flinders Street entrance, then there is only one small step up to the double doors. There is a ramp here during performances.

Forum I: the large auditorium on the ground floor and there are flat entrances from the foyer. If you are accessing this space from Flinders Street, there is a large railed staircase to the right and left of the foyer. There is an alternative side entrance on Russell Street which also has a large staircase.

Forum II: as an intimate space which seats 540-590 people, access from Flinders Street is via the large railed staircase to the left and right of the foyer. There is also alternative access using the side entrance on Russell Street.

With a varied and extensive history, Forum Melbourne was originally as a private residence and served several purposes until it because the Herald and Standard Newspaper Company occupied the building. In the early 1920’s, Stuart Doyle, the Managing Director of Union Theatres, purchased the site for the future development of the State Theatre. Stuart Doyle commissioned Eberson, who was known for designing atmospheric theatres, to build the theatre and construction began in 1927. The theatre opened in February 1929 and the opening night presented silent films and the first ‘talkie’ premiered on 6 April 1929. When it opened in February 1929, the cinema had the largest seating capacity in Australia of 3,371 people.

The theatre became known for its Moorish Revival exterior which featured minarets and a clock tower as well as its atmospheric feel with its blue twinkling ceilings and beautiful statues. In 1963, the organ was removed from the theatre and the cinema chain Greater Union converted the auditorium into two smaller cinemas. In 1985, the building was used by Revival Centres International, which was a Christian Organisation, before it was purchased by David Marriner’s Staged Developments Australia in 1995. Since then, it has been part of the Marriner Group’s portfolio Theatres.